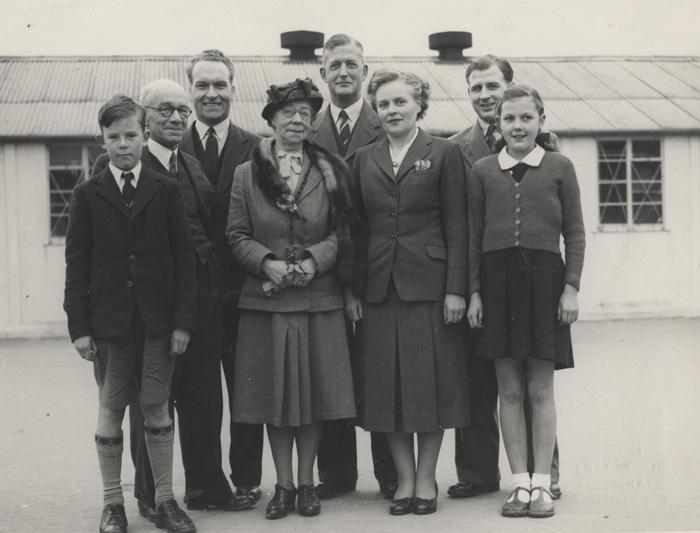 Colin Ward writes: The lady to the left I think is Miss Kennedy, the one on the right Miss Dunn and the tall guy behind them is Mr Bembridge. Can anyone else verify? I left there in 1951

When I started at

When I started at Springfield, about 1954, my first teacher was Miss Borrowfield, who looked a bit like the elderly lady on the left. The lady on the right I think is Miss Smith, who I had in my second year.If Mr Bembridge is in the photo he would be on the right. My sister is in England at the moment, she is older than me I will ask her when she gets home, if she can help. We live in Perth W.A. now.

I have though about this

I have though about this again, I now think the elderly lady was Miss Borrows.

the older lady in the photo

the older lady in the photo is Mrs Cantrill a local dignitry of the time.The shorter man to the right at the back is Billy Barton the local butcher and the tall man is certainly not Frank Bembridge.Mr Cockersole I remember very well

The man on the left is Mr W

The man on the left is Mr W (known as Willie) Wilson, the Headmaster who succeeded Mr Cockersole in September 1950 (I think) as I recall being sent to him (or was it mR Cockersole?) by Mrs Borrow - Class 7 for a caning in early 1951 on St George's Day for helping someone to wrongly draw the flag of St George, "when you should have known better." When I told what I had done wrong, he kindly said that he would not cane me, but I should learn to be more careful in future.

Mr Wilson lived at the top of Dale Road past the former camp and on the other side from Dr Rudge's White House. He died of cancer or some stomach ailment/illness (as I recall) during the 1954 Summer Holidays.

After that his son, John, used to come to our house in Huntley Avenue for tea on a Thursday and we played table footie .. he went to the new Spondon Grammar.

My father was the County Council's Clerk of Works for the school during this period.

I aqree the man in the middle is definitely not Mr Bembridge, but he looks vaguely familiar .. could he have been the then Chairman of School Governors?

I do not remember seeing the man on the right at all in my time living in Spondon (October 1948 to December 1955).

The boy pupil is John Waddington who lived in Royal Oak Road, and was in Clive House like myself.

The girl is Margaret Caughey whom I sat by in Mrs Dunn's Class 5.

The lady in the fur was a "village bigwig " of that era .. and probably was Mrs Cattrell (? ) as someone has said.

I think the other lady mignt by Mrs Smith (who took Class 6).

Neither are Mrs Dunn nor Mrs Borrow, however.

I hope this may be helpful.

The lady on the right was my

The lady on the right was my aunt Florence Smith, nee Woolley, whose family lived in Spondon and who later lived at Mickleover. I am not sure how long she taught at Springfield but I believe it was for some considerable time. She died in 1998.

We went to springfield in the

We went to springfield in the late 40s, early 50s. we think the characters in the front row of the photo are Mr Cockersol (head master), Mrs Borrows and Mrs Pearson.

I think the older man is the

I think the older man is the former headmaster Mr Cockersole standing next to Mrs Cantrill then Mrs Pearson with Billy Barton Jnr at the rear on the rhs. The pupils are John(forgotten his surname) and Margaret Caughey(pronounced Caffy) who lived in Beech Avenue and she married Len Dickens.

I have enjoyed looking at the

I think Mr Cockersol (head master), ?, Mrs Burrows (of the knitting needle collection and rulers), ?, ?, Mr Marriot (without his bike) 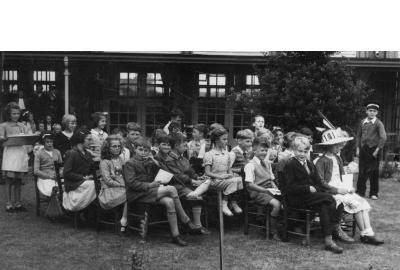 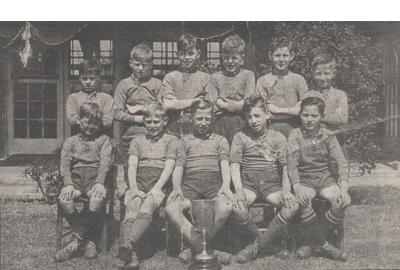 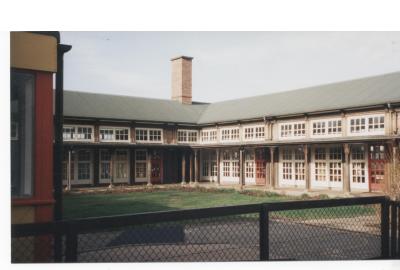 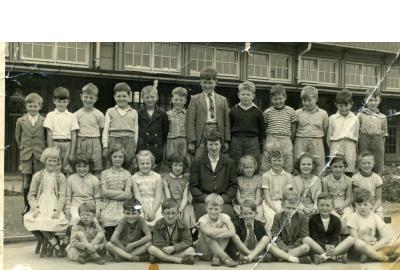 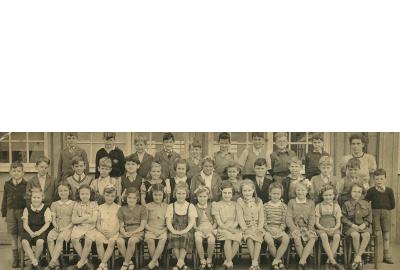