The team played on a pitch on the east side of Locko Road, prior to its being used for housing the late 1950s.  It was on a very pronounced ridge and furrow section of the mediaeval field system.

The photograph of the

The photograph of the football team c 1947 is interesting but I wonder if it is of an earlier date. The reason I say this is that I went to school with Roger Borrington in the early 1950's who lived in Kirkleys Ave. His father whom was called Ron (I think)was a local footballer and cricketer who played in Spondon before the Second World War and returned from it with one arm. I remember him tutoring us a cricket and demonstrated his batting prowess by hitting the best six I had seen at that age and with only one arm at that!

Further Information I can add

I can add to the information already supplied by Mr Earnshaw, who as a boy knew my father Roger Borrington. The name 'Ron Borrington' applied to the boy in the photograph, is probably an error, as my father doesn't recognise him, or know of anyone in the family with that name.

My grandfather, remembered by Mr Earnshaw for his cricket skills, was actually named Charles Borrington, and it was the First World War in which he lost his arm, not the Second.

Neil Kedzie, third from right, back row, is married to my father's sister, Nancy. 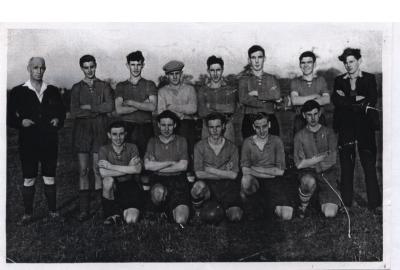