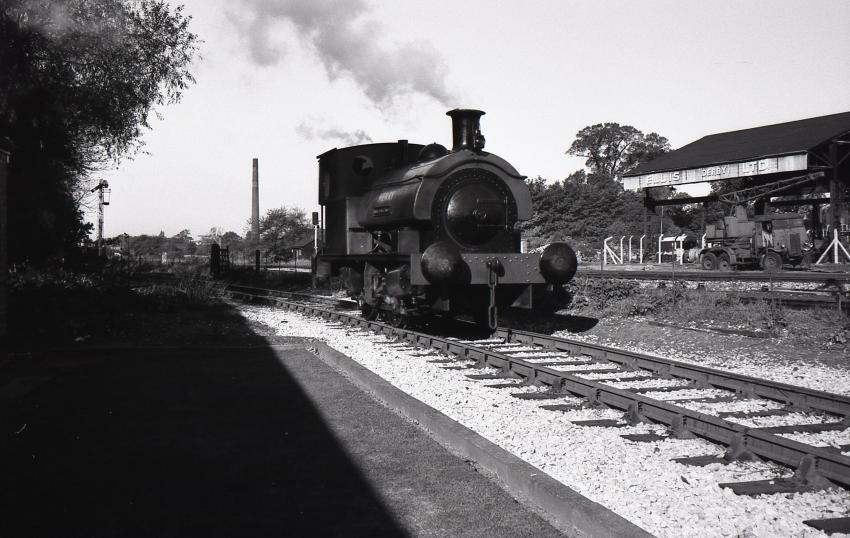 British Celanese 0-4-0ST locomotive HENRY built by R&W Hawthorn Leslie & Co. at their Newcastle upon Tyne works in 1901, works No. 2491. It came to Spondon in 1928 second-hand after first being overhauled in the locomotive works of Peckett & Sons, Bristol and it was named HENRY by its new owners after Dr. Henri Dreyfuss, the Swiss chemist who was chairman of the company. The engine worked at the Spondon works until the early 1970s and is pictured here at Spondon in the exchange sidings with British Rail in what is thought to be a special steaming for an Industrial Railway Society visit on 21st October 1972. By this time the loco was normally held in reserve to the diesel locos. It was eventually transferred to Courtauld’s Coventry works for preservation in March 1974. It is currently (2022) on static display in the railway roundhouse at Barrow Hill Museum near Chesterfield. Also of interest in this view is the scrap metal business of Ellis (Derby) Ltd. which was situated on land previously used as the BR Spondon goods yard. The company was incorporated on 18th January 1962, becoming Spondon Metals Ltd. on 8th July 1985. Voluntary liquidation followed on 14th December 1992. Housing now occupies the site.