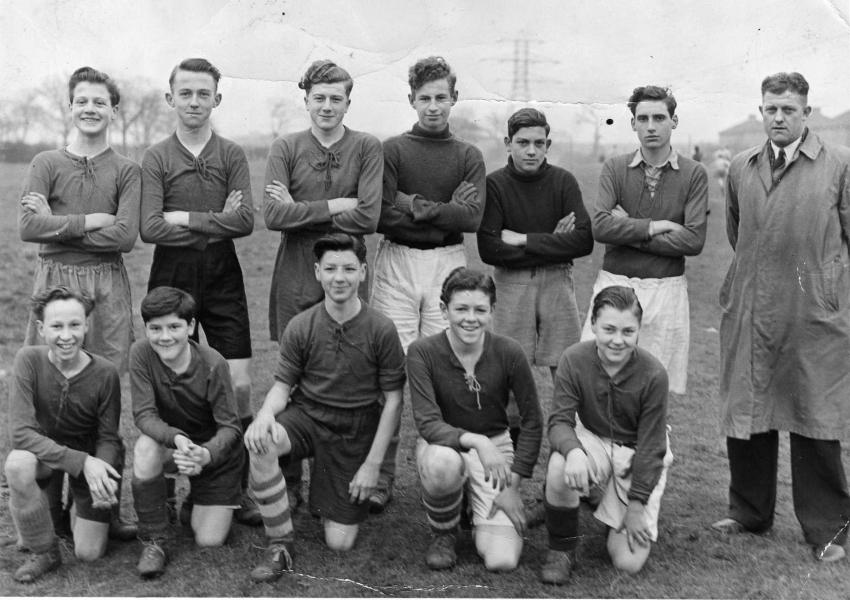 Taken by: Supplied by Keith Tyler
Spondon Rovers Juniors were members of the Derby & District Sunday Schools (later Welfare) League in the under 16s section.
This match took place on the Pylon Field in November 1948  when we beat Breadsall Juniors 2-1.
On the photograph are:
Back Row:   Ray Millinship, Peter Hunt, Derek Plummer, Michael Markham, Clarence Hanson, Roy Walker, Len Stone (secretary).
Front Row:   Norris Turner, John Armstrong, Ronald Fox, John Shields (capt.) and Keith Tyler
The Pylon Field was then part of  the farm of George Dexter whose farmhouse was situated immediately opposite the entrance to Huntley Avenue.   He used it only for horse grazing and, keen on sport,  took part himself in some of the cricket matches, including the regular evening annual Test' matches between Huntley Avenue and Merchant Avenue, the subject of great rivalry over several years.
1940-1949 People Spondon Rovers Juniors Football Club Sports Teams
Share this image:

I remember Keith Tyler and

I remember Keith Tyler and some of the other boys very well as I lived at 23 Huntley Ave from 1941-62. This house was just to the right of the photo. Although I was only 11 when this picture was taken I can remember helping to mark the pitch out with sawdust. Several of the boys would have been at Long Eaton Grammer School. I think Markam was the goalkepper and I later played in his house football team at LEGS.
I remember George Dexter very well, his eldest daughter and I would have been in the same class at Spondon Springfield.
Unfortunately George also kept cows in this field!!
Although I was only making up the numbers I can also remember playing in some of the 'Test Matches' against the Merchant Ave team.