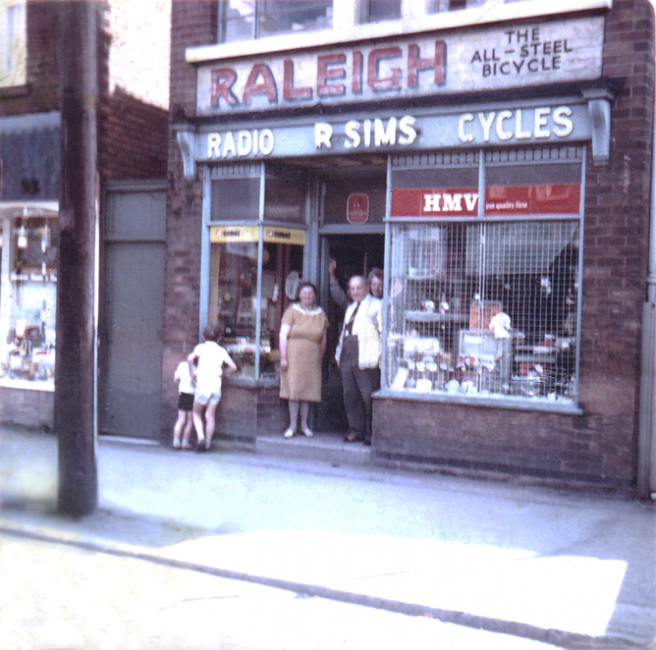 Bob Sims' cycle and gramophone shop was on Sitwell Street. Bob's grandson, Stuart, has supplied this photo of the shop, taken in 1962. Bob's shop was at 91 Sitwell Street, now home to The Hoptimist - Spondon Ltd. The building was just a single storey when Bob first opened his shop. As Stuart explains: "When he first acquired the shop, it was single storey with a flat roof that often leaked. He needed extra room to expand his business so a second floor was built with a pent roof. This cured the leaky roof and gave the extra space. I remember the first floor as a television workshop for his tv rental side of the business." "My Grandfather was at the shop for over 50 years. I worked for him after school and Saturdays in the 1960s and he told me many stories about the shop." Bob also originally owned another shop further down Sitwell Street at no. 53. This building is no longer there but stood where Spondon Garage now is. Stuart remembers: "My Grandfather told me that his Father owned Springfield Farm in Spondon and he worked for his Father in the day and rented the shop at number 53 when he was a lad. He would open the shop for a few hours a night. He told me stories that he had a motorbike and sidecar and would take orders for gramophone records, ride to Derby to buy them and sell them in the shop for a few pence profit. "It used to fascinate me listening to stories of how he built the business up from nothing when he was a young man. When I worked there in the 60s, he would repair cycles and spend hours loosening and tightening spokes to remove the buckle in a wheel and replace the rim if it could not be repaired. He would replace elements in electric irons and kettles too. He would never believe the throwaway world we now live in. "Teenagers would sometimes come in the shop with inner tubes they had purchased, returning them because they had holes in - obviously made by putting tyres back on using tyre levers. He would get them to bring their bike in and not only would he replace the tube but show them how to put tyres on without using tyre levers. When they had gone I used to say "lost money on that Grandad". He would reply they were tomorrow's customers who would likely buy their next bike from him. "When he died it was quite unbelievable to me how full St Werburgh's Church was. So many friends he had made in the 50 years he had his shop. He did have a second shop on Nottingham Road in Chaddesden and his son, my Dad, had a cycle and tv shop on Nottingham Road in Borrowash and a shop on Trowell Grove in Long Eaton. The shops were then called Bob Sims & Son." Bob sold the Sitwell Street shop in 1973 to Bernard Merry, who continued to sell similar products for a number of years. In the 1980s, the unit became home to Spondon Carpets and then later became DJT Hardware and then Spondon Hardware. It's now home to Spondon's newest pub, the Hoptimist.