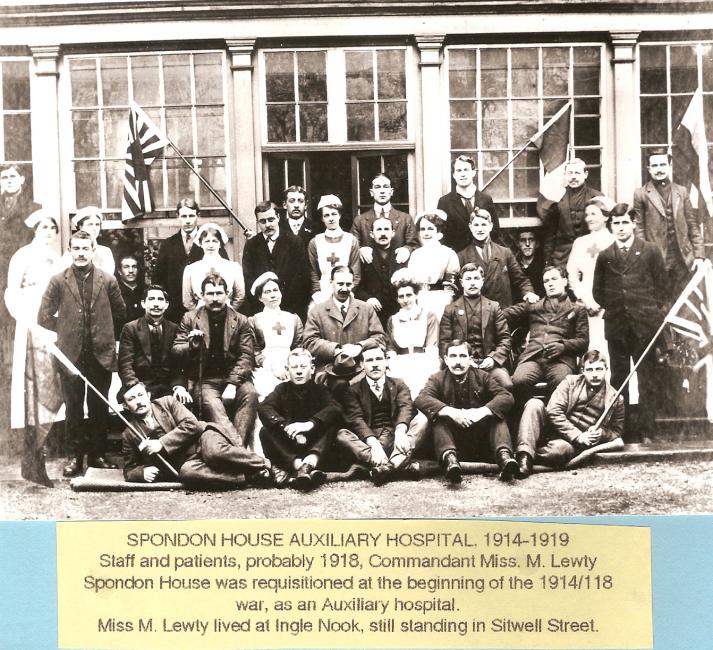 Staff and patients pictured outside Spondon House School which was requistioned as a hospital throughout the First World War.

Excellent picture of Spondon House Auxilliary Hospital - just to say that the Commandant was Mrs (not Miss) Mary Lewty, she wasd awarded the MBE in 1920, but sadly she died in 1921. Her grave is in Spondon Church Yard (I assume the Parish Church)

Mary Lewty is buried in

Mary Lewty is buried in Spondon Cemetery on Stoney Lane (previously part of Borrowash Road). She has a memorial stone cross with the inscription using metal letters which reads:-
"In Memory of MARY LEWTY, M.B.E.
THE DEARLY LOVED WIFE OF J.STANLEY LEWTY WHO PASSED ON, MAY 15.1921.
COMMANDANT OF THE SPONDON V.A.D. HOSPITAL. " AND WE KNOW THAT ALL THINGS WORK TOGETHER FOR GOOD TO THEM THAT LOVE GOD" ROMANS VIII.28

Spondon in the 1st World War:

Spondon in the 1st World War: The declaration of war in August 1914 had a profound effect on life. In Spondon, as elsewhere, men were encouraged to volunteer for the army. Spondon House (now West Park School) was converted into a hospital. It was run by Mrs Mary Lewty who was awarded a M.B.E. for her wartime services.
There at least two war memorials dedicated to the men of Spondon who gave their lives in the First World War, one on the wall of the library and one in St Werburgh’s Church. On a recent walk round Spondon Cemetery I found four war graves of men who died in the First World War. All four were residents of Spondon and their graves are cared for by the Commonwealth War Graves Commission ;( www.cwgc.org ).
I know of a 3rd war memorial recording the service of the members of the Liberal Club and alone of the known dead C Camm is recorded on that Roll of Honour. Spondon Historical Society are interested in recording all the Rolls of Honour within the village so if there any that we have missed please let us know on [email protected]