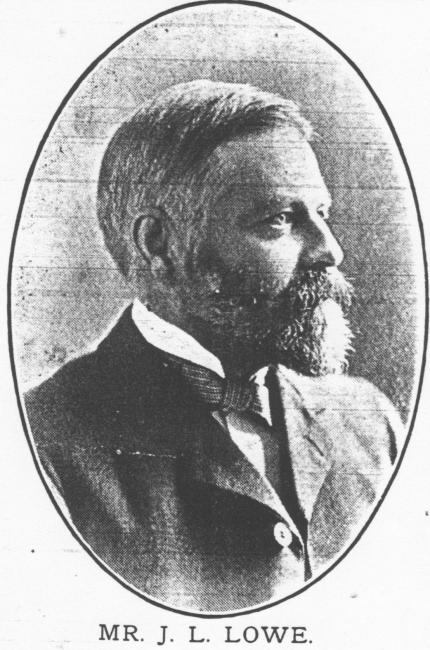 John Landor LOWE F.R.C.S. (1850-1931), who was a Civil Engineer employed by the Midland Railway in Derby,  came to live in Spondon sometime between 1901 and 1911. He lived with his wife and daughter in a house at No.1 Sitwell Street, which was opposite the Church. Sometime after his retirement on the 28 December 1915 he moved to London and later still to Littlehampton in Sussex. He was born in Burton on Trent on the 28 December 1850, the third son of Dr George Lowe. He was educated at Epsom College and then King’s College, London where he gained his BSc, and was also chosen to be a ‘Jelf Medalist’ by the Principal as the most distinguished student in his faculty in his final year. He joined the Engineering Department of the Midland Railway in Derby on 1 January 1872, and by 1890 he was appointed Chief Assistant for New Works under Mr John Allen McDonald, Chief Engineer.  Among the lines constructed under his supervision were Saxby to Bourne, New Mills to Heaton Mersey, Royston to Dewsbury, and many others.  On 20 December 1893 he married 21 year old Lydia Margaret McDonald at St John the Evangelist’s church in Clifton, Bristol. His bride was the sister of J.A. McDonald.  He died aged 80 years at his residence, Gratwick House, Norfolk Road, Littlehampton on 18 December 1931, just ten days short of his 81st birthday.